Way back when SketchUp first came out (right after Google bought it), I was thinking of things that might be fun to model and add to the SketchUp warehouse. I really enjoyed the quick and simple way that SketchUp allowed you to make models, and I was also interested in coming up with something that could be created programmatically, as it would allow me to dip my toes into Ruby (SketchUp's script language of choice).

I'd also been playing Katamari Damacy for a while, and had been really enjoying it. It's a strange game (it's sometimes described more as a 'toy' than a 'game') and basically involves rolling things up, which makes you bigger, allowing you to roll up even bigger things, etc. Combine this with an amazing soundtrack and a quirky, almost oedipal, father-son relationship and it makes for an entertaining experience. So why not model a Katamari, a sticky ball which looks something like this:

It looks simple enough, a sphere with a few small spheres placed around it. But how do you place the small spheres regularly around a sphere? I thought about spacing them regularly on a circumference of the sphere, and maybe choosing a few other circumferences at equally spaced angles, but this doesn't really look like how they're positioned above. So a better way to regularly position the spheres is to place them on the faces of a regular polyhedron. This way the Katamari will look the same from all angles and the spheres will all be evenly spaced over the sphere. A square will only give 6 sub-spheres, which is too few, an octahedron only 8, which still seems too little, so a dodecahedron, with 12 sides, seems like a good choice (in fact in the image above I just noticed we can see 3 full spheres, and 6 half spheres, suggesting there are 12 in total).

So how to create a dodecahedron in SketchUp? A dodecahedron consists of 12 regularly placed pentagons. Creating the pentagons is easy, but how to combine 12 of them into a dodecahedron? What is the angle between two sides of a dodecahedron? Obviously the easy way to do this is to find some obscure website that could maybe have information like that, but it was annoying me slightly that I couldn't work it out from first principles. Surely there must be a way to calculate this from scratch using just basic mathematics? There is, and don't call me Surely.

Let's say we just have two pentagons, laying flat next to each other, as shown below: 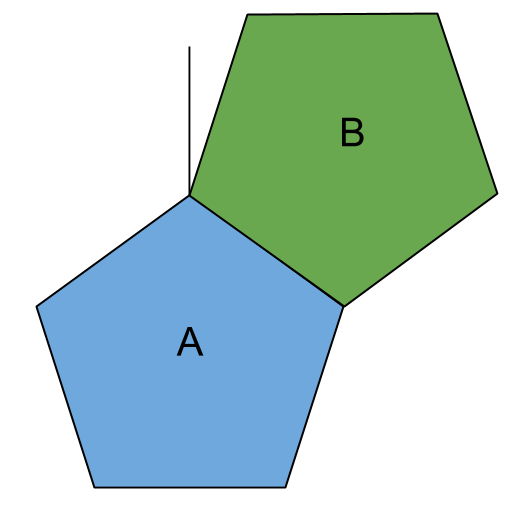 To make a dodecahedron we need to rotate B around its shared edge with A, until the angle the adjacent sides make equal half the outer angle at their shared point. In the image above I've drawn this angle for the tip of A--a vertical line, by symmetry, will split the angle around the tip of A in half. So in this case we would rotate B to B', where its edge closest to the vertical line becomes vertical (imagine in this case that B' is rotated out of the screen with its tip pointing towards you): 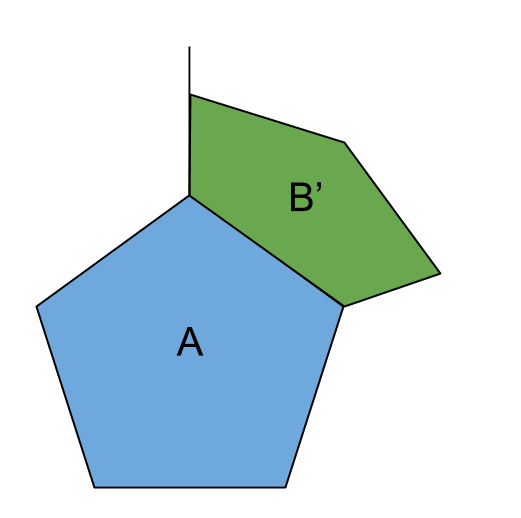 We can find this angle using simple trigonometry. We will be at the correct angle when tan b = tan a . -cos c: 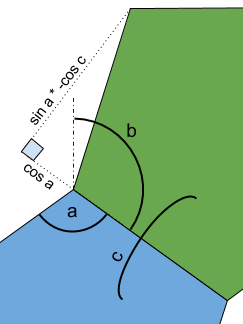 Interestingly this function works for all platonic solids with Schläfli symbol {p, q} where q is 3 (ie tetrahedron, cube, dodecahedron). On Wikipedia, they use 2*arcsin(cos(pi/3)/sin(pi/x)) for this angle, which I'm guessing is the same thing. Here is a plot of the function from 2 to 6.

After calculating that angle, I just needed to place some spheres on the faces and voila: 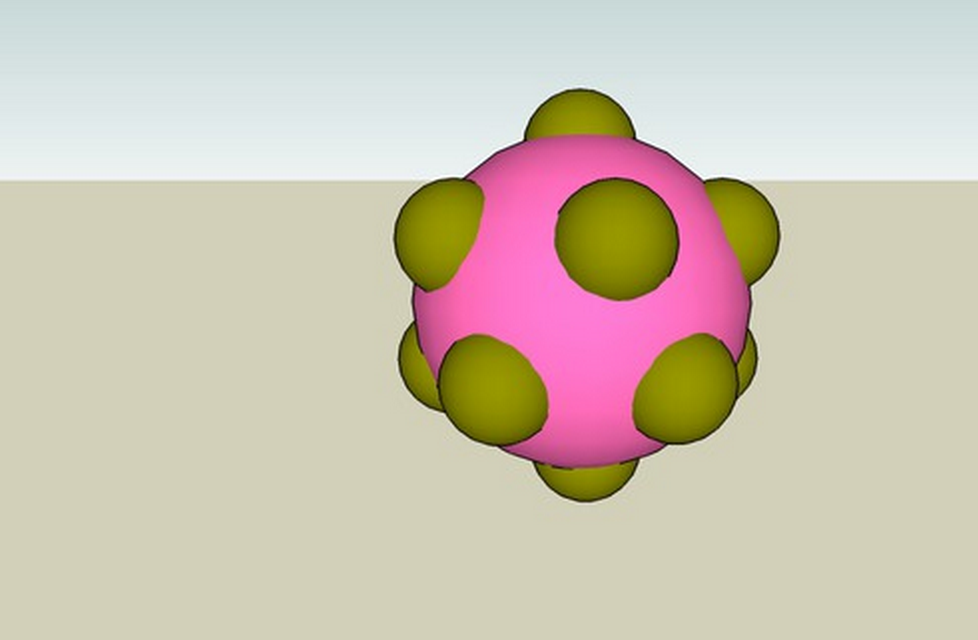 You can also do things like a compound of 5 cubes (model): 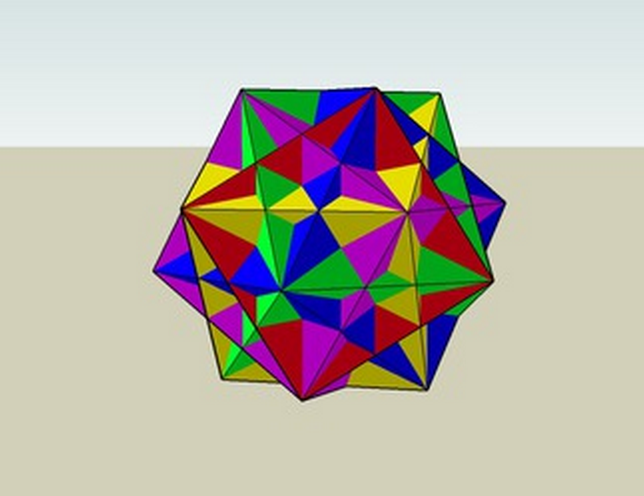 Unfortunately, I can't actually find the ruby scripts that created the above models. They're probably on a HD somewhere...
Posted by Matt at 1:14 PM