In the previous post, I discussed chords and how harmonics of a single note can be considered the basis for the notes of a chord. There's a very interesting discussion of how chords relate to the harmonics of a single note in this article originally published in Experimental Musical Instruments (which basically inspired this whole project). One of its claims (if I understand correctly) is that consonance only really occurs between identical notes, and chords themselves only sound consonant because they have shared notes in their harmonics (this means that if we call the harmonics of a single note timbre then we can say that notes of a nice-sounding chord depend only on the timbre of the instrument - the traditional major chord sounds nice only with a timbre that produces harmonics which are exact integer multiples of the root).

Part I looked at the notes in the harmonics, and this part will look at the common frequencies in both major and minor chords.

Previously, we saw how the harmonics of a single note produced a range of other notes. The diagram below shows the notes reached (as indicated by angle on the spiral) by these harmonics: 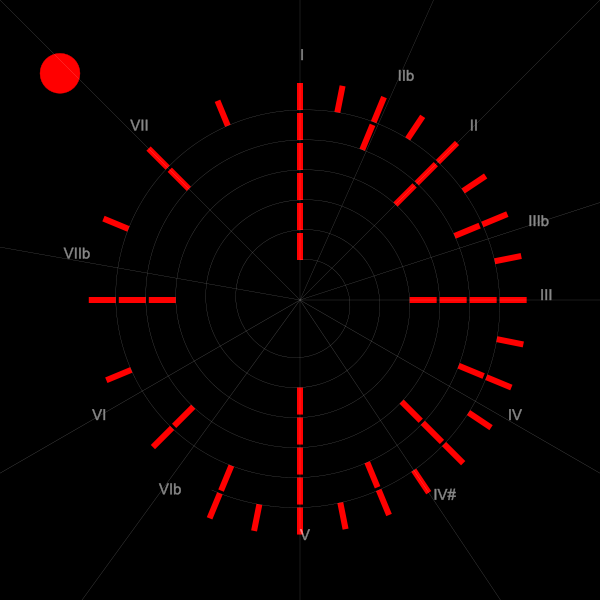 The notes for the major chord are taken from the first three unique angles encountered, the I, V and III notes.

What happens when we play a major chord using these three notes? The following shows us: 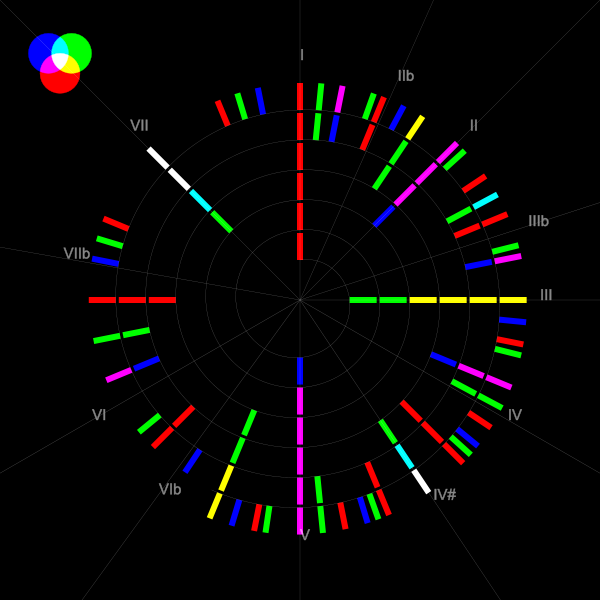 There's a lot of information in this chart, and I'm not sure exactly how to interpret it all. The root (I) and its harmonics are in red, the fifth (V) and its harmonics in blue and the third (III) in green. When notes coincide, the colors are combined additively (as indicated in the key in the top left). The first thing to note is that the III and V notes both combine with the root (turning from green to yellow and blue to magenta respectively). This isn't surprising, as we picked those notes exactly because of this property. What is maybe more surprising is the lack of white notes, with VII and IV# being the only notes where harmonics from all three notes combine. The II note has combined harmonics from the root and fifth, much like the V itself. Also oddly, none of the other notes have the root (I) as a harmonic, it stays purely red all the way to the edge of the spiral.

Whether our ears actually pick up all this information is another matter, but nonetheless it offers an interesting visual representation of a major chord.

The Otonality and Utonality link mentioned last time provides an elegant explanation for the notes of a major chord, being the first individual notes from the harmonics of the root, as we saw above. It also provides a similar explanation for the minor chord, with a few adjustments: the notes of a minor chord can be found from the subharmonics of the fifth of a minor chord! The subharmonics are integer divisions of the root frequency, eg  f, f/2, f/3, f/4...  (while the harmonics are integer multiples, eg f, 2f, 3f, 4f... ). If we look for the first unique notes, they are f, f/3, f/5 and again we can multiply by powers of 2 to get them in the same octave. Then we get ratios 1:4/3:8/5 or 15:20:24. Looking at Wikipedia

So what's going on here is that a minor chord is composed of the I, IIIb, V notes , and we can justify this by saying the notes are the first sub-harmonics of the V note. [Because I'm such a fan of this elegant theory, if it was up to me I'd prefer to rename minor chords to use the fifth rather than the root as the identifier - I'm guessing the reason the current scheme is used is due to the similarity to the major chord eg I, III, V for the major vs I, IIIb, V for the minor (you just have to move one finger on a piano!). If the fifth was the root, the notes would be I, IV, VIb which means moving two fingers!] I'm going to use both chords below, referring to the I, IV, VIb chord as a 'pseudo-minor' chord

All this theory about the minor chord is actually a lot easier to see in the diagram of the harmonics: 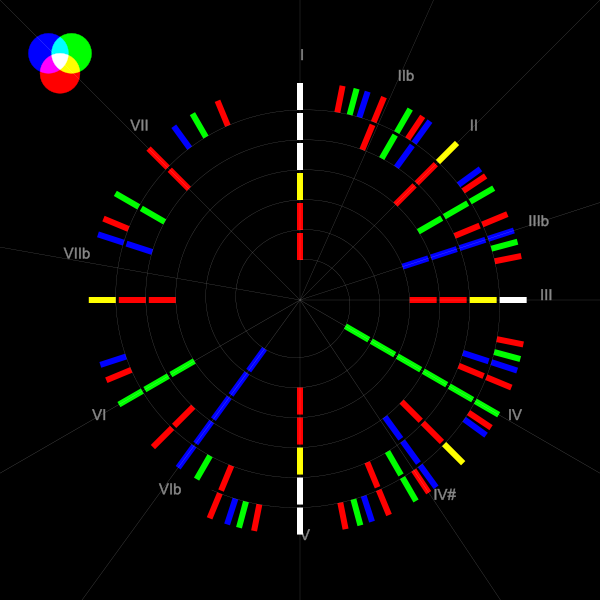 The above is the harmonics of the pseudo-minor. The I, IV and VIb notes are the first three notes that have a harmonic at the I position (we can see this clearly here, the 12 o'clock notes turn from red to yello to white as the harmonics combine). We can also see white notes on the III and V positions (even though the V note is not one of the chord notes it seems to play a significant role). This is in contrast to the major note, where there were relativley few white notes, but a lot more cyan, yellow and magenta notes.

We can look at the more traditional minor chord too: 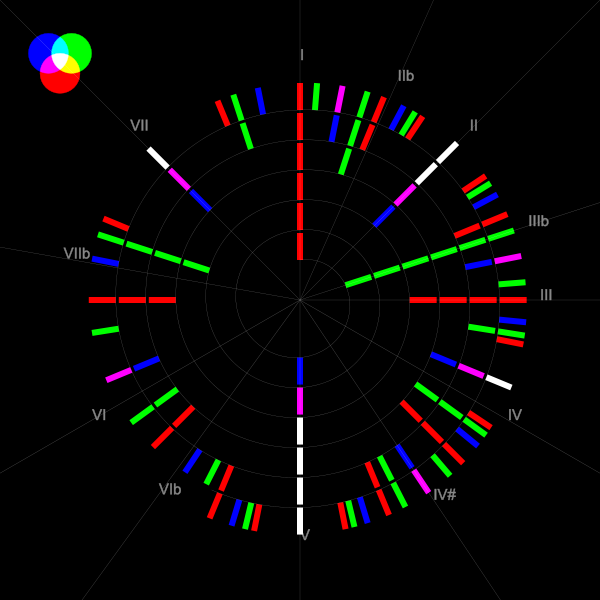 This is essentially the same as the previous diagram, but rearranged so that what was the IV note (all green in the previous diagram) is now rotated to the root (red), and the old root is increased by an octave and is now at the 6 o'clock V position (and blue). Again we see all three notes having harmonics at the V position (instead of the root) and white notes at the II position (which was V previously!).

I'm really pleased with the way these diagrams have turned out. If you want to play with the source and try to see what other chords look like, it's available on Github (it needs the ui_decorators class and PySide for the UI to work). There's lots to think about here, but two things I find interesting: The lack of a note at the 9 o'clock position, it has strong harmonics from the root (and even the IV note in the pseudo minor) and the number of harmonics found at the II and VII notes (especailly the VII note - it has harmonics from all notes in bot the major and minor chords). I haven't looked at what happens if we add a VII note to the mix, mainly because things seem complicated enough, and we're starting to run out of colors.

Another thing worth mentioning is that although the Python program can play the notes it creates, I've been mostly using it with the sound turned off. It may be there's not enough variation in the frequencies, but either way the actual notes sound pretty harsh and not particularly pleasant - I think it works better as a visual aid rather than an aural one.

The diagrams above have been starting at 440Hz and stopping at 22.1kHz, giving around 6 octaves or so. These limits were chosen as a sensible starting frequency and then a sensible upper limit for the human ear. However, we can choose to increase these limits and get more octaves. I'm including some more pictures here starting at 64Hz instead, giving us another few octaves, and at a higher resolution (1200x1200 instead of 600x600). The notes are smaller so they don't arbitrarily overlap at the higher octaves. 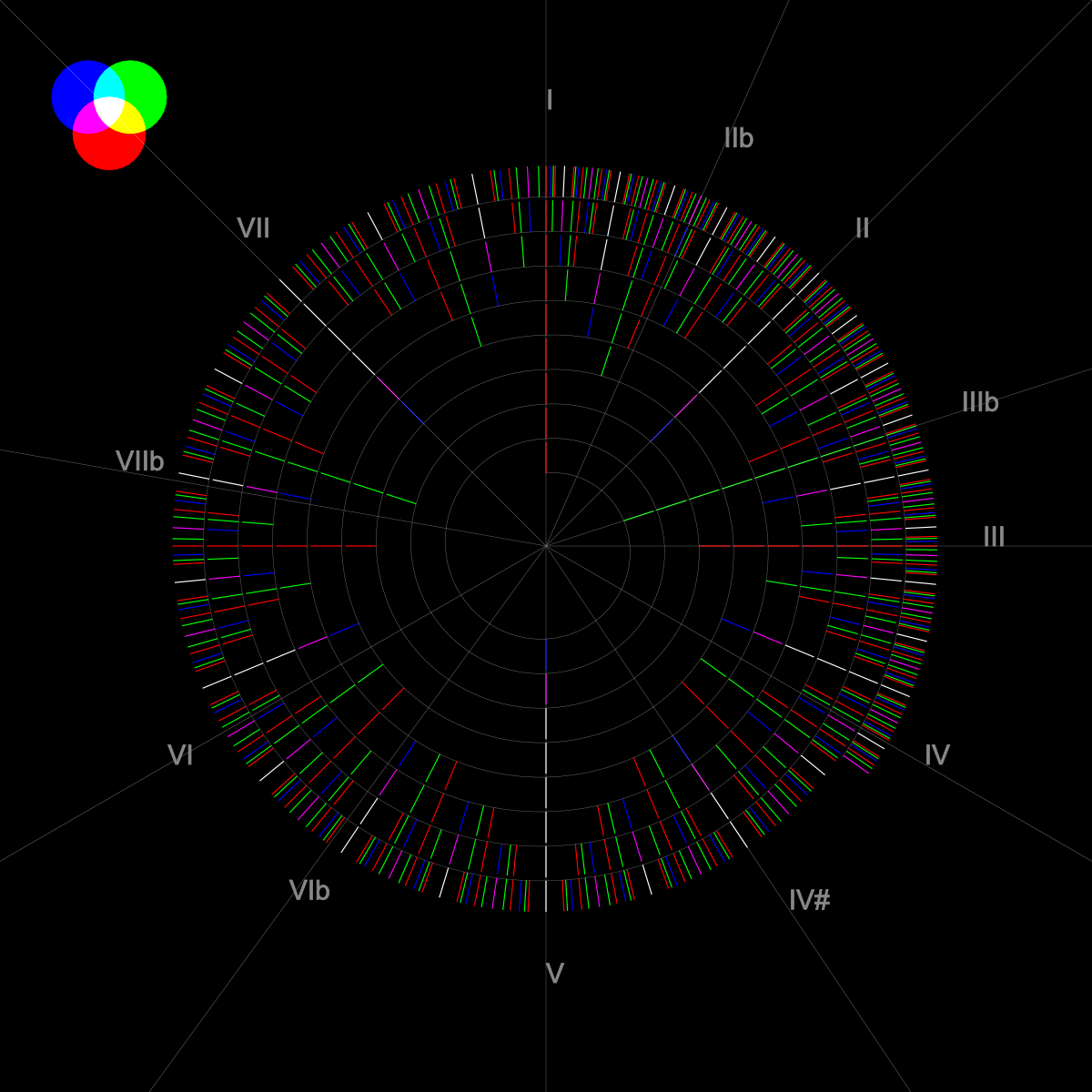 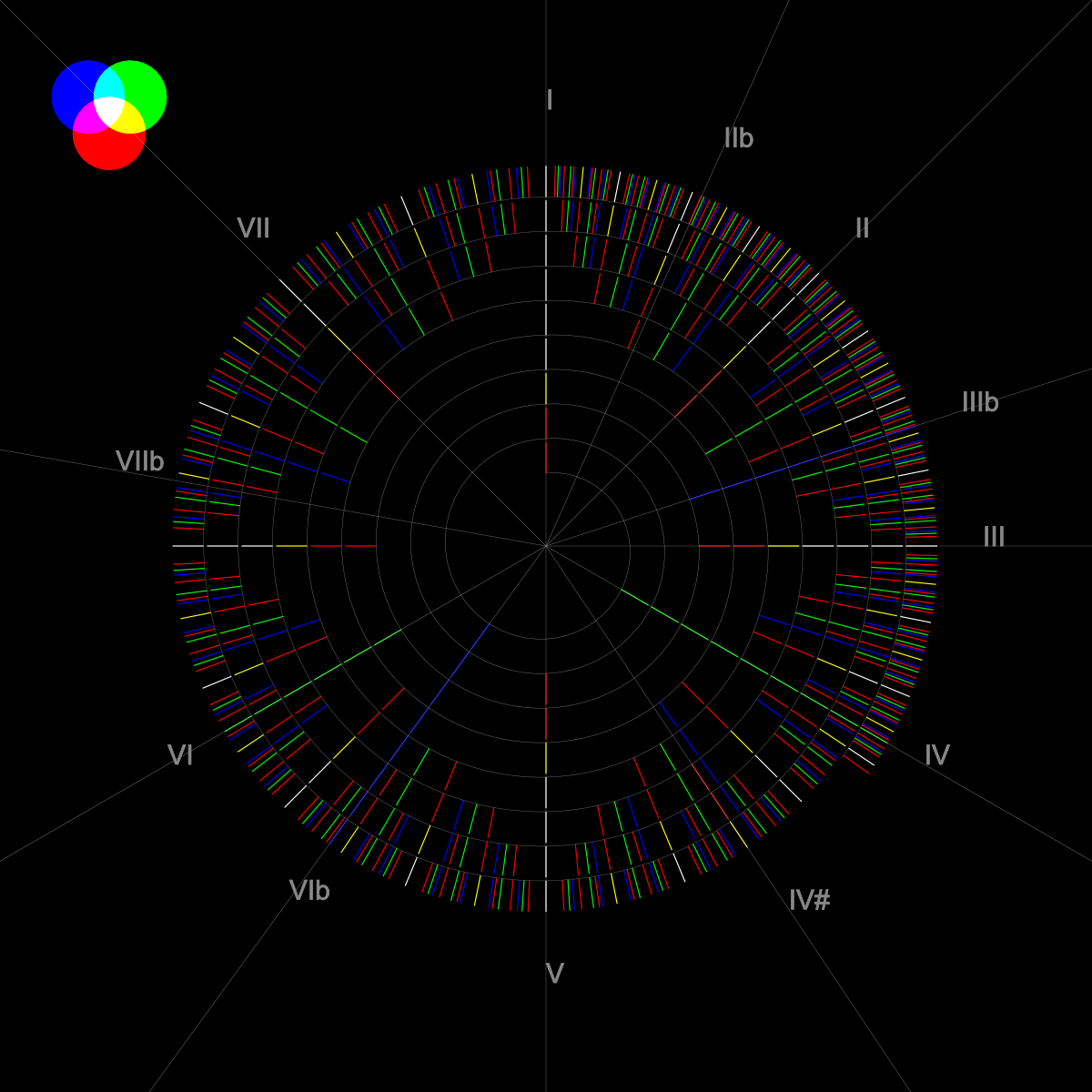